Marten Reed
The closest thing to a protagonist we've got. Mopey, passive, unsure of what to do with his life. SOUNDS LIKE A REAL WINNER, HUH

A horrible, horrible robot. Went to Robot Jail. Got out, currently living with Dale.

Steve
Marten's buddy from college. Kind of a bro, but in a pleasant way. Has much more success with the ladies than Marten.

Wil
Friend of Sven, poet and general dilettante. Wishes he had been born a hundred years earlier, even though he probably would have died of consumption.

Jim
Owner of the Secret Bakery. Divorcee cautiously dipping his toe back in the dating scene. Has a tweenage daughter, Samantha.

Padma
Employed at the Secret Bakery. Very family-oriented. Straightforward to the point of obliviousness.

PT410X
Linux-based AnthroPC. It's a heat sink, not a neckbeard.

Pizza Girl
Possibly a superhero, definitely a pizza delivery girl. Looks suspiciously like Penelope. This will never be explained.

Sara
Former employee at Coffee of Doom. Eaten by an allosaurus. RIP. 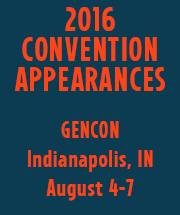