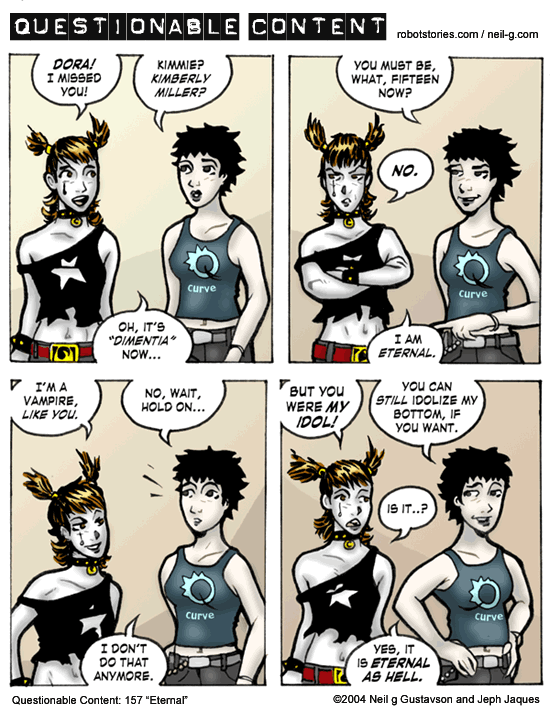 Hi, Neil g signing on here for a moment. First, I want to thank Jeph for giving me the opportunity to play in his sandbox. QC has risen quickly in popularity, and there is no doubt in my mind that it is due to his talent, personality, and dedication. I hope the strip to the left lives up to that.
So, now a bit about today's guest strip! Just as Jeph introduced Dora as a minor character later in his strip, I also introduced a "goth-influenced" character shortly after my 100th strip. Originally just known as the "Vampire Girl" or the "Goth Chick," Kimmie, aka "Dimentia," has become one of my favorites (and has undergone many, many style changes), just as Dora has kind of taken a seat as one of the main cast in Jeph's strip here. I enjoy drawing Kimberly, and she interacts well with just about every character I've introduced here to. So, it was only natural that I use this opportunity to have the two meet face to face.
Also, I must make an obligatory music plug now, though a bit of a crunchier bend than you may be used to on these pages. The album, "Come Clean" by Curve was played about three times through during the making on this strip. I can see the distorted vocals of Toni Halliday influencing bands like Garbage and the Kidney Thieves. A very dark, crunchy, electronic band that I can totally see Dora being interested in.